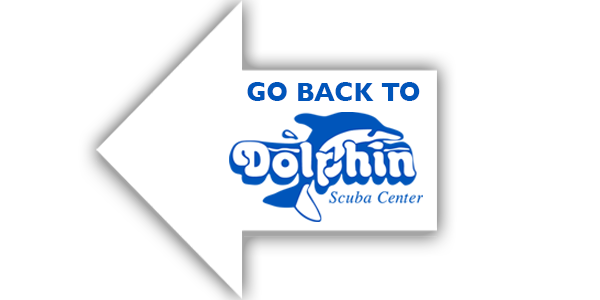 Guests aboard the ROATAN AGGRESSOR™ liveaboard will experience the best scuba diving in the Bay Islands of Honduras which is both easy and exciting. The Bay Islands are world-renowned for their sheer walls, mystical wrecks, massive barrel sponges and captivating macro critters. These waters are also home to larger marine species, such as Whale Sharks, Caribbean Reef Sharks and Bottlenose Dolphin. The Roatan region of Honduras has fantastic critter scuba diving with subjects like Electric Rays, Longsnout Seahorses, ferocious looking Spoon-nose Eels, Rough Box Crabs, Yellowheaded Jawfish, Sailfin Blennies and even Southern Stargazers

Roatan is ideally situated along The Mesoamerican Barrier Reef System (the second longest barrier reef in the world) that extends north of the Yucatan Peninsula and down to the Caribbean coast of Honduras. This extensive reef attracts a wide variety of marine animals and feeds the Bay Islands with healthy and diverse populations of fish and other marine creatures.

Roatan used to be the base of operations for more than 5,000 pirates. Now, passionate, “in the know” scuba divers on our liveaboard trips to Honduras are the new swashbuckling buccaneers seeking marine treasures at sites such as the Aguila Wreck, Mary’s Place and Coco’s Sea Mounts.

Getting There, Passports & Visa Documentation:

The Bay Islands of Honduras consist of eight islands and 53 small cays located off the northern coast of Honduras. Roatan is the largest with mountains and hilltops with Utila being very different with low mangrove swamps, hills and fertile soil.

Many major airlines fly direct nonstop from the USA to Roatan (RTB) from multiple gateways on Saturday: American Airlines, Delta, and United. There are many direct flights from the US and several connecting flights through the US gateway cities of Miami, Atlanta, Houston and Dallas.

The ROATAN AGGRESSOR™ liveaboard departs for scuba diving trips from the dock located at Romeo's Restaurant in French Harbor, Roatan. It is located 7 miles from the Roatán International Airport (RTB) in Coxen Hole.

Visitors must have a current passport, adequate funds to support themselves, and a return airline ticket. US citizens require a passport that must be valid for 6 months from date of entry. It is the travelers’ responsibility to ensure they have the proper visa to travel into each country on his or her itinerary as well as for re-entry and return to their country. Since regulations vary by country, contact your consulate or embassy of your country for the requirement.

Guests arriving into the Roatán International Airport on Saturday will first clear customs then proceed outside. There are several options depending on what time you arrive. You may take a taxi to Romeo's Restaurant and store your bags on the ROATAN AGGRESSOR™ and have lunch until boarding at 3:30 pm or, from the airport you may take a taxi to the host hotel, Clarion Suites at Pineapple Villas in French Harbor and have lunch and enjoy their facilities for an additional charge. Guests may board the yacht anytime between 3:30 pm - 6:00 pm. Everyone must be onboard by 6 pm.

After a full week of scuba diving, the ROATAN AGGRESSOR™ liveaboard returns back to the dock located at Romeo's Restaurant Friday afternoon after lunch (2 dives offered Friday). A sunset cocktail party will be hosted on the sundeck with dinner ashore. This is the only meal not included in the charter. Guests may dine at Romeo's Restaurant or at one of several local restaurants close by. Check-out is Saturday morning at 8 am. The crew will assist organizing transportation back to the Roatán International Airport or the host hotel if you are extending your stay. 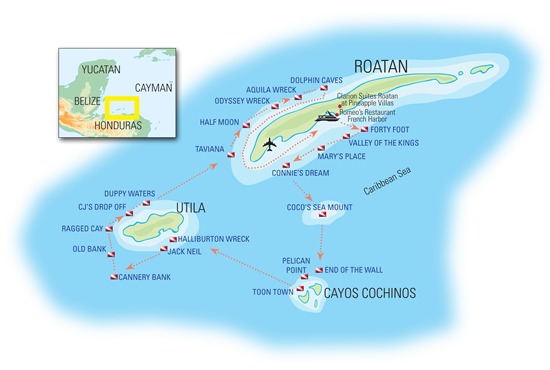 The Roatan dive sites are the best of the Bay Islands. These islands are Honduras' brightest jems offering divers sheer walls, beautiful shallow reefs, spectacular wrecks and offshore sea mounts. These pristine sea mounts represent a Caribbean frontier rarely explored by divers. Here are some of the areas the Roatan Aggressor will visit.

Mary’s Place – One of the most famous dive sites off of the south side of Roatan, Mary’s Place has a lush reef with crevasses and tunnels running through it that provide great photo opportunities.

Taviana’s Wall - Lots of turtles are found here and this site makes a great night dive with octopus, crabs and lobsters.

Wreck of the Aquila - This wreck is home to 15 - 20 large Groupers and a big blue Parrot Fish, as well as a big green Moray Eel that is always willing to come out and play.

Odyssey Wreck - This freighter is Roatan’s largest wreck measuring 300 feet long, 50 feet wide, and 85 feet tall. It is one of the largest wrecks in the Caribbean.

Coco’s Sea Mount - Coco’s beauty is in the mix of coral and good visibility that divers always enjoy. The ocean floor rises from hundreds of feet to only 40 feet from the surface. These sea mounts are far from Utila and Roatan, therefore, they are rarely visited by day boat divers.

Black Hills – A favorite among all divers, you can count on seeing schools of Creole Wrasse, Atlantic Spadefish, Horse-eye Jack and Southern Sennets at this seamount, along with Scorpionfish, Toadfish and the rare Frog Fish. A resident turtle appears unafraid of divers, as do the Barracuda. Large pelagic fish can be spotted here, such as Manta Rays, Marlin, and sharks including the big boy himself, the Whale Shark!

Duppy Waters – A coral garden begins beneath the boat at 20 feet, with walls sloping off into the blue. Eagle Rays, stingrays, octopus and schools of Creole Wrasse and Blue Tang are in abundance.

CJ’s Drop-off - This is one for the deep dive enthusiast. Spiny Caribbean Lobster, Golden Tail Moray and schools of Jack are plentiful.

Raggedy Cay – This popular site begins at 30 feet and falls away to 130 feet, with Majestic Eagle Rays swooping by and Hawksbill Turtles munching away on soft corals. Octopus can be found around the sand channels along the coral garden as well as Spotted Morays.

Old Bank – This is a very nice shallow dive site, where the rare Elkhorn Coral flourishes and smaller critters, like the Fringed Filefish and Caribbean Reef Squid, can be seen along the walls. In the sandy areas, the allusive Yellowhead Jawfish can be spotted peering out of its hole.

Cannery Bank – Here’s a prime opportunity to witness large pelagic fish that roam the open waters. There are logs of vibrant color on the mounts, beginning at 25 feet and sloping to 110 feet.

Halliburton Wreck – Sunk in 1998, this artificial reef begins at 65 feet with the wheelhouse and continues down to the vessel bottom at 100 feet. Green Morays, Spotted Drum, Yellowline Arrow Crabs, Channel Clinging Crabs and Bearded Fire Worms are usually seen on this exceptional deep dive, as well as the occasional Porcupine Fish and Pipefish.

Hawksbill Bank – The Roatan Aggressor is one of a few that visit this seamount beginning at 40 feet and sloping down to 80 feet. Bluebell tunicates are in abundance, and the rare Fingerprints can also be found. A resident Hawksbill turtle gives the site its name.

Toon Town - Known for its macro life, this dive off Cayos Cochinos is jam-packed with big clumps of bluebell tunicates, small crabs and flamingo tongue cowries, among a long laundry list of headliners from the tinier marine kingdoms.

Pelican Point- every kind of reef fish imaginable, including French and queen angelfish, butterfly fish, tangs, and parrotfish. On the outside of the reef, you may see sharks and barracuda patrolling 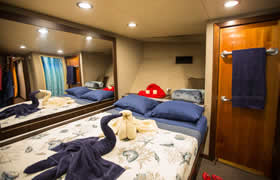 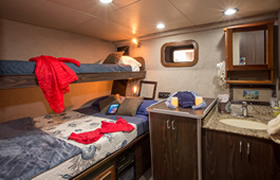 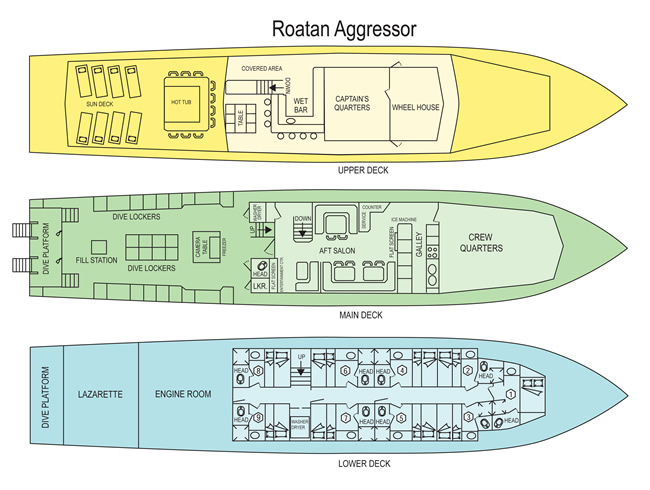 Built and maintained to the specifications of the local regulatory agencies and the regulations of the country of the flag.

Honduras has been an Aggressor destination since 1989.